Another school year has begun, and I want to wish good luck to you all.

I want to tell you about an important experience that I had last summer. In July in fact I realized my wish, I went to Rome to watch the live concert of my favorite band: Muse.

Muse is an English band that was born in 1992. Their style is very particular, in fact they combine different musical styles, in particular Rock and Electronic. Their songs are written by the singer Matthew Bellamy and they are about many different themes, like war, love, apocalypse and politics. They have won al lot of awards like the American Music Award and the MTV Europe Awards.

So, back to my experience! It all started when my family  gave me two tickets for this concert for Christmas, because they knew that I love  this band  so much. When I saw the tickets I was incredibly happy.

When 6th July at last arrived, I left  with my father for Rome. At 6 p.m. the gates of the Olympic stadium opened  and a lot of people went in. At 9 p.m. the concert started!! Waooo  I’ll never forget the moment when the Muse arrived on stage! 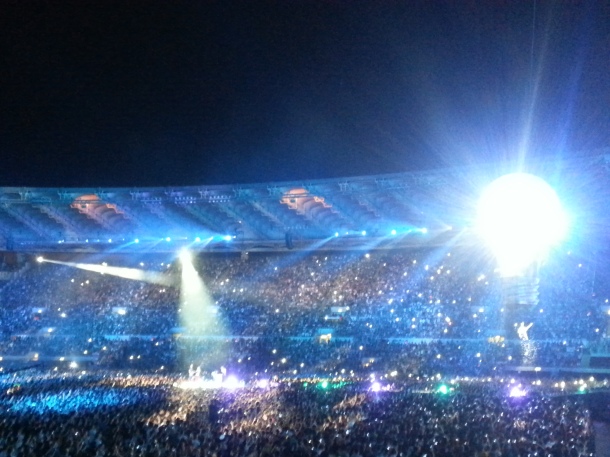 On the stage there were seven high columns from which fire went out, and the flames seemed to follow the rhythm of the music,

It was wonderful, we could feel the heat on our skins because we were very close to the stage. The first song that they sang was “Supremacy”, from their new album. In that moment the full stadium got crazy and everybody started singing.

The concert was fantastic, and when Muse sang “ Madness, resistance and follow me “ everybody sang their hearts.  The concert was a real show, in particular when Matthew sang “ Blackout”: above him was a giant light bulb from  which  a dancer came out, it was magic.

The last song was “Starlight”, in my opinion one of most beautiful songs ever written. We couldn’t hear the singer’s voice because we heard only the voice of the audience who was singing that last song.

That night has been the most beautiful in my life thanks also to my family, because they helped me realize my dream.