Hi everyone! It’s been a long time! 😉

I’m going to talk about a TV-series that really hit me, (even if I’ve only watched one episode).

The producer of the well-known American Horror Story Tv-series, Ryan Murphy, came up with the idea of making a true crime anthology. The first season is called “O. J. Simpson vs the people” and refers to the crime case of Orenthal James Simpson (starring Cuba Gooding, Jr. ) against his ex wife. 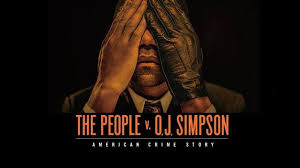 In 1994 some policemen found the dead bodies of Nicole Brown Simpson, his ex-wife, and Ronald Goldman, a friend of her, in the garden of her house.

Evidence like a glove stained with blood and fingerprints of the famous football player were enough to have him accused of their murder. He surrounded himself with the best lawyers of Los Angeles: Robert Shapiro (John Travolta) and Johnnie Cochran (Courtney B. Vance), who in the next episodes will try to defend Simpson from the district attorney Marcia Clark ( Sarah Paulson).

At the end of the first episode, when the police goes to his house to capture him, he manages to escape.

The reason why I like this season consists in the fact that the series deals with important and famous events. Needless to say, my favourite actress is Sarah Paulson, who perfectly suits her role.

While acting as Marcia Clark in the morning, she becomes Sally McKenna in the evening for American Horror Story Hotel: she is just a great actress.

I have to say that I’m grateful to Ryan Murphy for having created another wonderful Tv-series; (obviously, the other fantastic saga is American Horror Story). Don’t you think so? 😉